skip to main | skip to sidebar

Dawning of a new defensive age

It should be noted that a new defensive strategic was introduced this bleak winter day.

Since facts really have no place on this forum consider all that follows to be the Truth.

In the dying moments of the afternoon Mick introduced* the VB (Volleyball-Blitz) defense.

It is a simple 1-3. The 1 always blitzes and after each down the group rotates one position clockwise. What a tweest!

Of course, it only is applicable when the numbers are odd (well odder) and the blitz is "on".

Note, it was originally* run counter-clockwise, but this confused Mad Dog so it was refined.

The VB-D was perfectly* executed by the indomitable* group of Mick, Mad Dog, Dusty and Doogie.

This defense was responsible for 3* consecutive stops. Including my highlight-reel-worthy* pick.

* Your experience may vary.
Posted by Barrow Troll at 2:45 PM No comments:

"Once you take away Bob's confidence and luck all he has left are his fundamentals."

Mike and I also had a dandy collision with Ryan. Ryan is lucky that both Mike and I have air bags.
Posted by Barrow Troll at 8:42 PM 1 comment:

I discovered there's an easier way to for everyone to submit blog entries to the sundayfootball.ca site, rather than going through the (possible) hassle of signing up for a Google ID and entering it via the web interface.  Blair, I'm looking at you, Mr. I'm-going-to-post-about-this from last week.

You can email your entry to the email address I sent you earlier and it will turn it into a post. (Don't want to publish that on this site, we'll start getting spam.  Ask Mike if you need the address again).

Remember that it will include everything, including the signature at the bottom of your email, and any crap your company/email provider tacks on, like disclaimers and such.

For now, I'll set it to post automatically, but if we start getting spam or something, I'll turn on "approval" so that I can edit/view them first.  I think anyone who can post via the web can then do that approval stage, if it comes to that.  Currently that's Mark, Paul, Dustin and myself.

You want talk, I'll give you talk

Well, "stories" wasn't actually my idea, it was Paul's request, so the quiet is his fault not mine. But I'm willing to step into the void. Especially as I had a good day (not counting forgetting the cones and timer). And that was pretty much the opposite of Paul.

Highlights for me? If I recall correctly, I caught 4 TDs. One was a "Tall thing" over and behind Paul, and the one that finished the game which Mark literally called as "Mike, post for the TD". Plus I threw a ridiculous, thread-the-needle, Danny McManus TD between Paul and Blair into Mark, and Paul got a touch on it; I'm not sure about Blair.

And if that wasn't enough for Paul, he was unable to catch a cold today; I'm not sure he could even throw one.

Funny how the tides turn from week to week.

Why is Sunday Football Blogging not so active?

So once a week or so, I spend 2 minutes to see if the old Sunday Football stories blog has any new info or smack or well anything at all on it. Nope, last post Sept 16th. Way to go Paul, now nobody uses it, wait, how about I stick something on that invokes a new energy? Nah, that would require ingenuity or creativity or personality, oh well, I can still post something.

Ryan, the newest regular! All right, now we're cookin'. Sunday footbfall has a new member, love it! What's your story Ryan? Do you have time to Blog? You should because I've heard that you don't consider anything below 10C football weather. Maybe you'll ease into it. Maybe since you haven't broken yourself yet (come to think of it, I think that's the criteria for becoming a regular) Just don't break yourself and stop coming out and you're in.

Best ever Sunday. 1998 I think, about 2 feet of fresh snow, about 8 guys, and about -10C maybe a bit colder, who cares, layer up man! Any way, lots of full out dives into 'manholes' a.k.a the place you dig yourself out of after a full layout dive into 2 ft of snow. Hard high knee running and tonnes of fun. Never forget it, hope to see it again someday. What a blast!

Take that you Sunday football silent majority, the Mad Dog is barking.

Why is 23C so brutally hot in September? We ask this every year and seem surprised every year.

Highlight 1: A tweak* thought that he was going to go through our bags while we were playing. At the last second, his tweak buddy warned him when he saw us walking that direction.

Highlight 2: Billy showing up with the kids and playing in regular runners and jeans while the kids played on top of the rental SUV**.

Guests: Raj, Rob and Ryan from The Wizards

Key play 1: Paul's hook that left Gaylor*** in the dust for a TD.
Key play 2: Paul's interception return for TD to end the game.

No, not "Brrrrrr" because it was cold, "Brrrrrr" because that was the sound of the little dude riding one of those mini-cycles around the field. I smiled to myself when I pictured Dusty doubling Mike and Jeff on it - like a circus bike being ridden by three bears. Then it up and quit and he pushed it home. I think that it cratered from the strain of the virtual weight.

Here's a catch-all post with all the old online photo links.

First the Shutterfly.com albums:
And now the Picasa albums:

Paul and the rest of you longtimers out there. There's oodles of legend.

Or the time that another Eskimo showed you all what it meant to 'juke'?

What would happen if some of the Mobley's of years gone past were to be captured here?

What about Double Cover Doug?

Or the leading into the tractor/bison/fill in large item thing?

I'm looking forward to the text y'all produce for future reading pleasure.

This guy comes out to a regular Sunday one fall day several years ago. He's introduced as Ken, one of Bobby's friends.

He looks somewhat fit and therefore somewhat intimidating. Keep in mind the average fitness required to participate. Not the perceived fitness each of us has about ourselves...

We play for a while. There's some give and take. The usual.

I line up opposite and 'bump' Ken off the line. Except, instead of bump and run, it becomes bump and bump. Now there's two dogs escalating the intensity. And so Bobby, and others I'm sure but clearly don't remember (age, adrenalin, whatever else causes Alzheimer's), say Whoa! and eventually we Whoa.

Ironically, in recent times, Ken moves in next door to the Mad Dog. He recalls playing football with me to Mary his wife when introducing me. Doesn't sound like any hard feelings but still not sure.

May never be sure. But the story has become part of the fabric of Sunday Football. Bobby may recall it instantly when I line up to 'bump' him off the line. I know there's been references by Bobby that sound like attempts to avoid the possibility of escalating. Even years later...

Reputation is a funny thing. Everyone has one. Mostly, everyone has some idea of what theirs is. But also, mostly everyone else's view of your isn't the same as your view of yours.
Posted by Mad Dog at 10:16 AM No comments: 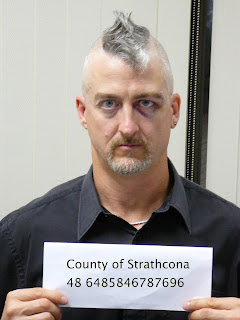 So I try this blogging thing with a faulty internet thing and no thing happens. What a surprise!

Next time the technology can bite me.
Posted by Mad Dog at 7:41 PM 4 comments:

The blog is ready, all we need is the stories to fill it up.
Posted by Totty at 11:37 PM 4 comments: